Her smothering mothering felt unbearable to teenage audiences, but it's actually what kept William anchored 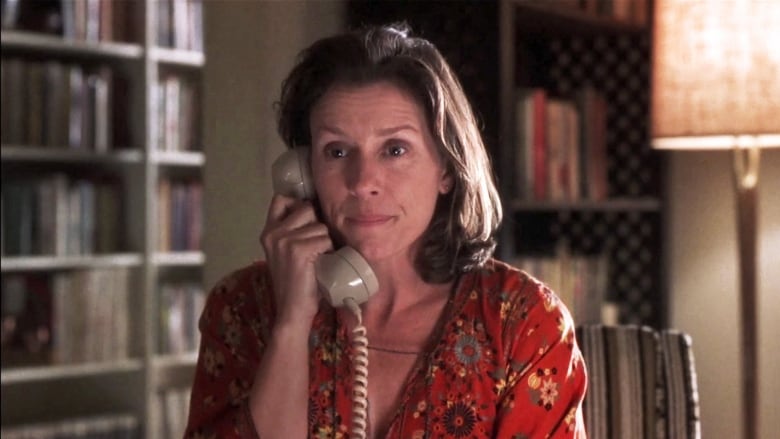 Anne-iversaries is a bi-weekly column by writer Anne T. Donahue that explores and celebrates the pop culture that defined the '90s and 2000s and the way it affects us now (with, of course, a few personal anecdotes along the way).

The first time most of us saw Almost Famous upon its release back in 2000, it was obvious who the story's antagonist was meant to be. Uptight, anxious, overly honest, and frustratingly all-knowing, Elaine Miller (Frances McDormand) was the mother of our nightmares. While she may have allowed her sweet baby son (15-year-old William Miller, played by Patrick Fugit) to galavant across America with a bus full of rockstars, she continuously ruins his fantasies of freedom with check-ins, pep talks, and "Don't take drugs!" From hotel rooms to backstage hallways, she permeates the free-wheeling feelings of rock 'n roll's death rattle with her love and intensity.

Which actually ends up making her the hero of the film.

Although her uptight attitude was infuriating to watch as a teenager, her love ends up being what keeps William anchored through the wild ride of being on the road. Her unwavering support fuels his drive and his intellect, while her own desire to challenge social norms is what leads to William's independent nature: after all, instead of going to school, he joins an up-and-coming band on their North American tour. Arguably, without a woman like Elaine behind him, William would lack the foundation on which his entire personality is built.

I was the same age as William when Almost Famous was released, and I was filled with rage almost every second I had to face Elaine and her flare for dominating all spaces. At 15, I saw her as a representative of the establishment I was trying to rebel against. To me, she was a shrew who drove away young people with buzzkill warnings against drinking or drugs. But of course, this is actually just what happens when someone cares so much that they smother their loved ones with adoration and worry.

When Elaine's daughter Anita (Zooey Deschanel) flees for a career as a flight attendant, it delighted me. Abandonment, I believed, was what Elaine deserved for trying to impose rules on her children. This was the consequence of banning Simon and Garfunkel records. (So what if they were "on pot"?) But at 15, I also idealized the life of a Band-Aid and romanticized the egregiously inappropriate relationship between the band's guitarist Russell Hammond (Billy Crudup) and underage girlfriend Penny Lane (Kate Hudson). I believed I would find my own worth by clinging to men I saw as more interesting or important than I was. And I wished for the guts to live loudly; to wear crop tops with fur coats, travel, party, and abandon a safe, traditional life while flying alongside bands and musicians. In reality, I worked at the McDonalds across the street from my house. So I treated Almost Famous as the promise of a world outside the small one I was living in — and Elaine was the one person trying to ruin the fun.

But that makes her the most important character. Almost Famous is ultimately even more of a love letter to family than it is to music. Yes, William travels the country with a band that submerges him in the best and worst aspects of a tumultuous industry (set to one of the best soundtracks ever). But he is consistently anchored by the one character who actually cares about him. He is tethered to someone who won't let him disappear into a world that's notorious for devouring naive and earnest souls. And he knows that regardless of what happens, and regardless of his frustrations, he is loved. He knows that he can go home (which he eventually does). And while he may come up against her incessant phone calls, he's also aware that she supports his dreams of being a music journalist. Otherwise, she never would've let him take the assignment in the first place. In fact, Elaine's growth over the course of the film is a further testament to her ability to outshine almost every character she comes up against. (Minus Sapphire: "This is the maid speaking, by the way.") And most importantly, she grows on her own terms.

It's a wonderful journey to watch, particularly since Elaine exists outside of the youthful world of rock and roll and mostly stays in her comfortable universe of suburban California and the college she teaches at. When we first meet her, she's behaving erratically, imposing strange rules on her children and getting caught in bizarre lies about William's age. But when Anita and William try to get away, Elaine chooses to question herself and her approach to parenting. Ultimately, over the course of the movie, she realizes that in order to unconditionally love her children, she must accept them for who they really are. And then she does just that.

As the rest of the movie goes on, the dynamic between the other characters begins to get more toxic. But ultimately, everyone ends up following Elaine's lead: they double down on what they believe in, they get hurt and confused when their plans don't work out, and then they grow from it. The difference is, these characters had to learn what love was. Elaine already knew — she just had to learn to love them in their own image instead of hers.

When I watch Almost Famous now, I adore Elaine. I relate to her wanting to protect her loved ones from what she thinks might hurt them, and I know I'm simply a classroom away from going on a tangent about how rock stars have kidnapped my son. (And I don't even have a son. I do have a cat, though, and I will fight to the death for him.) My heart explodes every time she acts in a way she hopes will ensure her kids are happy and healthy and willing to challenge the status quo. And I'm delighted every time I watch that final scene with her, William, and Anita at the kitchen table eating dinner — basking in each others' similarities and differences, demonstrating what I think is the greatest love of all.

Tips for avoiding back pain and injury while working from home

It's official: Harrison Ford will return in a fifth 'Indiana...

Is there a way to save Toronto's only Black-owned radio...

Feds in talks with Moderna for earlier delivery of doses,...

As initial vaccinations with the newly approved Pfizer-BioNTech vaccine are set...

Calgary father who killed his daughter in drunk driving...

Thanks to a $250,000 donation, Nunavut’s only humane society is now about halfway...

Trudeau's virtual tour and Bieber's country music nod: In The News for Sept. 2