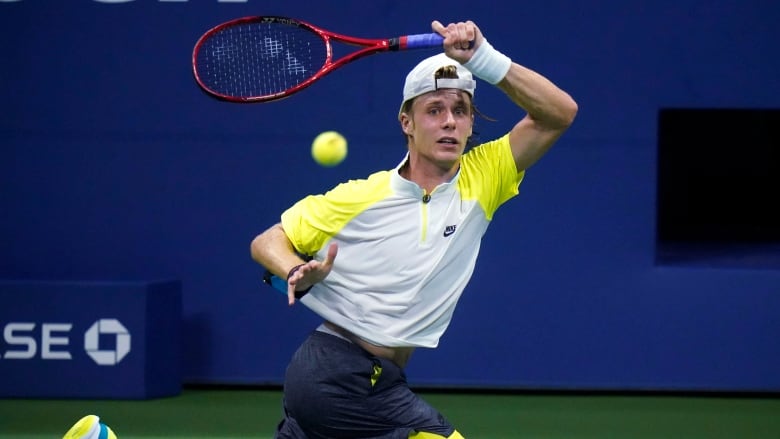 Canadian Denis Shapovalov has been bounced from the U.S. Open.

They needed four hours and nine minutes to complete the five-set thriller at Arthur Ashe Stadium.

"It's a tough moment. I was in that match, I had a good chance to win it. I was almost in every set. Very frustrating right now. Tough to look at positives," said Shapovalov.

The 29-year-old Carreno Busta, the 20th seed, will now face 23-year-old German and No. 5 seed Alexander Zverev in the semifinals.

"You are playing to be in the semifinals. But I was comfortable on court," said Carreno Busta. "The fifth set, I enjoyed the moment. It's not easy to play these kind of matches because it was a really good battle. Denis plays very good."

The 12th-seeded Shapovalov fired 26 aces, but also had 11 double faults and 76 unforced errors compared to just 42 for his opponent.

Shapovalov, who began with serve, and Carreno Busta exchanged break points to open the match.

Shapovalov rolled from there and broke Carreno Busta again with a backhand to go up 5-3 holding serve. His sixth ace helped him take the first set.

Carreno Busta had many great chances to seize control of the 77-minute second set only for Shapovalov to respond each time, keeping it close and eventually forcing a tiebreaker.

The Spaniard broke Shapovalov twice but couldn't hold serve either time and gave back the points while failing to retain any momentum. Instead of leading, it was 3-3 after Shapovalov's fourth converted break point.

Shapovalov could be heard voicing his frustration at times through the second set, with multiple unforced errors including six double faults. He got to 6-6 before losing the set on an ace.

Carreno Busta converted the first break point of the third set, taking a 3-2 lead when Shapovalov returned the ball wide.

Shapovalov caught a break when his initial return later on was out and Carreno Busta didn't challenge. And he let out a roar of excitement when he broke Carreno Busta in the same game to make it 4-4.

The third set also went to a tiebreaker, and was won by Carreno Busta with a forehand winner down the line.

Shapovalov continued to grind as the match entered its fourth hour, and raced out to a big advantage in the fourth set on his way to forcing a fifth.

He broke Carreno Busta to open and then pounded four aces in a row to hold serve. He converted his seventh break point on the next game and was up 4-0 after firing his 22nd ace of the match.

Carreno Busta appeared to be saving his energy for the fifth, with Shapovalov breaking him one more time on his way to winning the set in only 28 minutes.

The two traded serves until Shapovalov double faulted for the 11th time to give Carreno Busta the break and a 4-2 lead in the deciding set.

Shapovalov let out a sigh as he saw his tournament come to an end after battling for so long.

"It was tough. You know, going into the fifth set, it's the final one. You try to push. But I was pretty tired. He moved much better in the fifth set," said Shapovalov.

Zverev reached the final four for the first time by overcoming 12 double-faults and some deficits to beat Borna Coric in four sets earlier Tuesday.

Shapovalov, from Richmond Hill, Ont., was the first Canadian to ever reach the quarter-finals of men's singles at the U.S. Open.

Shapovalov was also eliminated by Carreno Busta in the fourth round of the 2017 U.S. Open.

What you need to know about COVID-19 in Ottawa on Wednesday, Sept. 9

While COVID-19 infections continue to rise among Indigenous people across Canada,...

Relatives make plea for info on Hong Kong detainees in...

Relatives of a dozen Hong Kong residents who have been detained in mainland China...

Actor and wrestler Thomas Lister Jr., also known as "Tiny," was found dead in his...

Court records show Nygard was arrested under the Extradition Act and is to appear...

Ontario is reporting more than 1,900 new COVID-19 cases after a single-day drop...