Is there a way to save Toronto's only Black-owned radio station G98.7FM?

Black-owned spaces in this city seem to be under constant threat. How do communities grow in their absence? 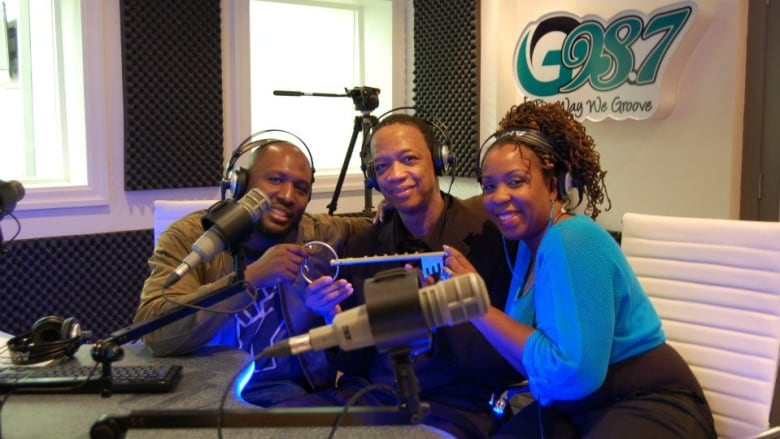 Black Light is a column by Governor General Award-winning writer Amanda Parris that spotlights, champions and challenges art and popular culture that is created by Black people and/or centres Black people.

Next week, Toronto's only Black-owned commercial radio station may be sold. G98.7FM (also known as CKFG-FM) is set to be awarded to the highest bidder after being placed in a court-ordered receivership. It sounds like a modern day auction block — and it feels like déjà vu.

Black-owned spaces in this city, from radio stations to cultural festivals to print outlets to physical communities, seem to be under constant threat. Reflecting on this reality, I've been wondering: how do communities define, support, grow, nurture, challenge and enter into dialogue in the absence of these spaces?

A petition to keep G98.7 Black-owned has been signed by over 11,000 people. Letters of support have been written by Toronto Mayor John Tory, Ontario Premier Doug Ford, Ontario NDP leader Andrea Horwath and the NDP Black Caucus. In less than a decade on the air, the station has become a pivotal point of connection and community for many across the GTA, from the daily positive energy vibe set by Mark & Jem in the Morning, to the crucial spotlight on local music provided by R Chung with 100% Canadian, and of course the popular continental vibes brought by Mr. Bonde and MissGo2Girl's The African Groove Show. It took 10 years to get the initial license for the station before its launch in 2011. But in the past two years, a breathtakingly rapid succession of headline-grabbing events began to spell out an uncertain future.

In 2018, there were accusations of non-compliance from the CRTC, the public agency that regulates and supervises the industry. In 2019, the station's ambitious founder Fitzroy Gordon passed away, and just a few months later, public accusations of financial mismanagement and misconduct placed the station under investigative receivership. And now here we are — awaiting the potential decimation of yet another Black-owned space.

Being Black in Canada: Highlights the stories and experiences of Black Canadians
The tragedy of it all feels eerily familiar. It's impossible to think about this moment without the looming memory of Toronto's first Black-owned commercial radio station, Flow 93.5FM — another beloved community space whose launch required an Avengers-level effort. Milestone Communications brought together Black community leaders, millions of dollars in fundraising, 12 years of lobbying, a door-to-door mobilization campaign, over 14,000 letters written in support, street marches and even the creation of an award-winning protest anthem by local artists called "Can't Repress the Cause." The request for a radio license was rejected twice by the CRTC, first in favour of a country and western music station that the commissioners argued would "contribute the most to programming diversity" (I swear, I can't make this up), and then in favour of our national public broadcaster, the CBC. (Fun fact: the CBC was also one of the reasons why it took so long for the team behind G98.7 to get their license when they issued a channel adjacency grievance.)

But once Flow 93.5FM was on the air, it immediately etched its legacy into the fabric of the city, setting a remarkably high standard for what a Black radio station could achieve and stand for. In his award-winning memoir In the Black: My Life, founder and Milestone president Denham Jolly describes a vision for the station that transcended the music that would be played or the programming that would be curated for the airwaves. His vision was aimed at nurturing the next generation of talent and working in concert with the cultural tentpoles of the community: "[We] will conduct talent searches, produce live concerts, help fund Caribana, provide journalism scholarships for minority youth, and stage free events ... And I reminded everyone that, in fulfilling our mission, we still had to be mindful that Milestone was a business and had to operate it as such. Otherwise we would lose it — and all of the good it could do for our community." Flow successfully captured the hardest-to-reach youth demographic, regularly surpassed the mandated minimum for Canadian content, won awards and became a model of success emulated by similar bids for "urban" radio stations in cities like Vancouver, Calgary and Edmonton.

According to Jolly, the end of Flow's time as a Black-owned station was the inevitable result of the massive media mergers that occurred in the mid-2000s. With the 2007 sale of Standard Radio to Astral Media and CHUM Limited (which controlled 33 radio stations) and the consolidation of Bell Globemedia (now Bell Media), the radio industry became a playground for conglomerates. The consequence? Drastically reduced ad rates that Flow just couldn't compete with. Jolly writes about the harsh reality he and the Milestone board had to face in 2010: "Even though our listenership was moving up, with a more than 25% increase in our market share, the new ever-falling pricing structure no longer allowed for a stand-alone station." In early 2011 — just a few months before the official launch of G98.7 — Flow was sold to Bell Media through its CTV subsidiary.

The loss of Flow was a bitter pill for Toronto's Black communities, and the various iterations the station has taken since have felt like salt in a wound that seems destined to fester. G98.7 may now be one more addition to a narrative of ongoing struggle to sustain Black-owned spaces — one that transcends medium and time period. Memories loom of the loss of outlets like Contrast Newspaper, Spear: Canada's Truth and Soul Magazine, Our Lives newspaper, Word Magazine and Sway Magazine. I've also been thinking a lot about our once-iconic festival Caribana, the groundbreaking publishing house Sister Vision Press, the ongoing gentrification of neighbourhoods like Little Jamaica and the cataclysmic loss of community radio stations like CKLN. Although not owned by Black folks, these sites were frequently a welcome home for our stories, music and perspectives. Each day, it feels like the space we can claim as our own in this city is getting smaller and smaller.

I am also considering what this legacy means for the new platforms and institutions that are currently being built or advocated for. What are the lessons we can take from these examples to consider the long-term sustainability of new projects like the Black Screen Office? How do we collectively ensure that the recently launched independent publishing house Hush Harbour, created by writers Whitney French and Alannah Johnson, is set up for lasting success in an industry constantly in flux?

In many of the historic scenarios I've listed, there are frequently behind-the-scenes conflicts that contribute. Unsustainable business plans, historically rooted seeds of discord and a tendency to rely too heavily on a single charismatic leader all play their part. But there are also larger patterns of hostile industries that create seemingly insurmountable challenges, and the combination is a pressure cooker designed to explode.

In a recent Instagram post, G98.7 host Jemini (who also formerly worked for Flow and CKLN) described the way larger companies have used their influence to curtail outreach, advertising and interview opportunities. She writes: "You can't imagine the systemic racism we've faced, the stereotypes, judgment and suppression from advertisers, other huge corporations and radio conglomerates that point out at every given opportunity that we are no threat and not at their level, yet spend time and money to cripple us at every turn. So if we are no threat and you work this hard to belittle us and silence our voice it must be our very existence that you find abhorrent."

G98.7 isn't perfect. There have been many times that I've felt frustrated by the conservative lean of its talk shows and the limited scope it employs when defining the Black communities it represents. In its early years, the station was reluctant to create a purposeful space for hip hop culture, turning down the opportunity to revive Flow's excellent and wildly popular show O.T.A. Live! and preferring instead to curate a musical selection geared to the tastes of an older Caribbean demographic. In the almost-decade of its existence, the station has also created little to no safe and purposeful spaces for Black LGBTQ communities — an absence that feels all the more painful as we see many of our most important political movements of the past few years spearheaded by members of these communities. And I often wish that its most popular talk shows used their platforms to engage in conversations with more historical context, intellectual nuance and critical depth.

But with all that said, I'm not ready to let it go. I haven't been able to stop thinking about the lesson shared by revolutionary theatre artist Philip Akin in my recent interview with him: should we focus our efforts trying to change and transform institutions that barely let us in the door, or should we redirect that energy to strengthen and invest in our own spaces? Even if they're not flawless, spaces like G98.7, which offer so much value to their communities, should be given the opportunity to learn and grow instead of being destroyed.

Radio remains a powerful platform for communication and connectivity in Canada. According to a 2019 CRTC Communications Monitoring Report, 88% of Canadians over the age of 18 reported to have listened to traditional radio in any given month of 2018, a number that widely surpassed the amount of people who had checked out YouTube videos (55%) or personalized streaming services (38%). In the wake of a global viral pandemic, a continental cultural reckoning and the local gutting of neighbourhoods and communities for the sake of condos and transit lines, it feels like a deeply cruel moment to have such a critical and relevant platform yanked from our control.

When our newspapers, magazines, festivals, publishing houses and radio stations disappear, it becomes that much harder to convene, to converse, to challenge and to check — to support, to celebrate, to highlight, to nurture, to amplify, to mobilize and to mourn. And when these platforms have to be built anew over and over again, they are relying on communities that are a little less hopeful and ever more cynical every time.

The cup-half-empty side of me dons its conspiracy theory hat and whispers, "Maybe that's the point." The cup-half-full side replies, "So what are you going to do about it?"

When to not ignore acne, rosacea and eczema according to a derm

It's official: Harrison Ford will return in a fifth 'Indiana...

Why Frances McDormand's Elaine Miller is the true heart...

Should teachers, education workers be given COVID-19 vaccine...

TORONTO -- As Canada continues with some of its first vaccinations against COVID-19,...

YEREVAN -- Ethnic Armenian authorities in the region of Nagorno-Karabakh accused...

HALIFAX -- A widening portrait of how a Nova Scotia mass killer acquired his weapons...

Which parts of Canada can expect a white Christmas?

MONTREAL -- "I cried a lot for the first couple of days," Linda Phillips said of...

91-year-old woman dies after being found in frigid temperatures...

CALGARY -- Calgary police are investigating the death of a long-term care home resident...

Estonians erect statue and give home to beloved stray dog

TALLINN, ESTONIA -- Zorik was never the tail-wagging or hand-licking type. But that...

A homeless person lies in a tent pitched in a centre reservation in downtown in...

COVID-19 has shuttered the ski season in the Alps -- with...

France's recent decision to shut down ski lifts due to COVID-19 fears will have...