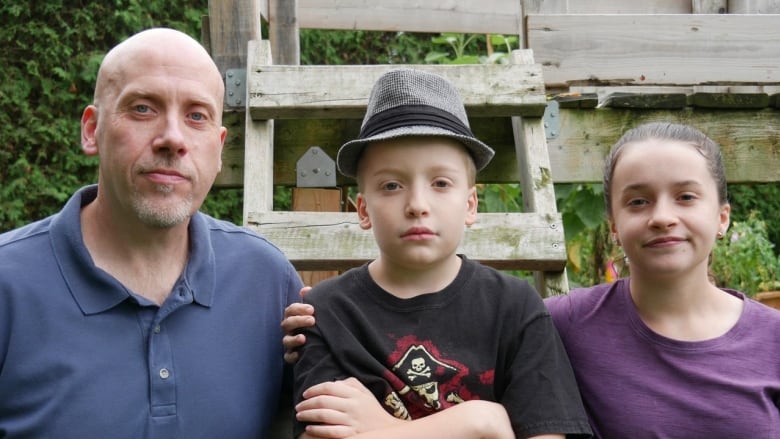 A North Dundas, Ont., man says it's unfair his children won't be able to learn the language of their choice because the area's Catholic school board doesn't have enough teachers qualified to deliver online classes in French.

David Thompson's son and daughter were both enrolled in elementary French immersion, but the family opted for remote learning this fall after considering the risks of COVID-19.

However, the Catholic District School Board of Eastern Ontario (CDSBEO) says all its French-speaking teachers will be assigned to classrooms, leaving no one to teach any elementary-level online classes in French.

"It was quite shocking to hear that there would be no French instruction at all. It didn't seem fundamentally right to limit those who chose the online from having any sort of instruction in French," Thompson said.

The family has decided to stick with remote learning for health reasons, but said they're disappointed the board and Ministry of Education aren't doing more to support French-language instruction for young students at home.

"It doesn't seem to be fair. I'm not saying we expect these to be easy decisions, but we would've thought more would have been done to accommodate the online to be equal to those attending in person," Thompson said.

1,700 students signed up for remote learning
Thompson said the situation is particularly difficult for his daughter who's starting Grade 8, and who wants to continue in French immersion through high school.

He said given the significant francophone communities in Prescott-Russell and Cornwall, Ont., which are also served by the board, French instruction should be a priority.

It's setting up a situation of inequity for sure.- Mike Hamilton, OECTA

The CDSBEO says approximately 1,700 elementary students have signed up for virtual learning this fall.

The board said it's providing additional French-language resources to remote learners, but there won't be a teacher leading classes. There are consultants to help direct families to independent learning resources, the board said.

"The CDSBEO is one of several boards in the province dealing with this issue. The Board continues to actively seek and recruit qualified French language teachers," wrote spokesperson Amber LaBerge in an email to CBC News.

'Behind the 8-ball'
Mike Hamilton, local unit president for the Ontario English Catholic Teachers' Association (OECTA), said the fact the board still has vacancies mere days away from its staggered start on Sept. 14, is evidence of the current chaos.

"We are behind the 8-ball in terms of readiness, and that continues to be a frustration," Hamilton said. "It's setting up a situation of inequity for sure, where people who have concerns about their health or the health of members of their family are losing out on the opportunity for their French instruction."

The Upper Canada District School Board, which administers public schools in roughly the same area as the CDSBEO, said Wednesday that virtual learners will have full access to its French programs because they'll be joining in-person peers online.

In a statement to CBC on Wednesday, the minister of education's spokesperson said "school boards have developed plans that best suit their local needs."

The statement said the ministry encourages and supports French-language education, and referred to the overall $900 million in provincewide funding allocated to the back-to-school effort.

'Dangerous territory': How Ottawa-Gatineau became a COVID-19 hot spot, and what...

Should teachers, education workers be given COVID-19 vaccine...

Calgary man who died while rescuing girl from B.C. lake...

CALGARY -- The late Jonathan Stein-Palmiere has been posthumously recognized for...

Montreal mother, 42, has a message after nearly dying of...

MONTREAL -- As Quebecers grumbled, debated and haggled this month over COVID-19...

Verdict due in trial of French train attacker

PARIS -- A verdict is due Thursday in the month-long trial of an Islamic State operative...

MONTREAL -- Karla Homolka may have resettled yet again near Montreal, but she can’t...

LONDON, UNITED KINGDOM -- A lovesick Scottish man who bought a jet-ski so he could...