Benjamin 'Ben' Ray Davidson died of a heart attack in August. He was 44. 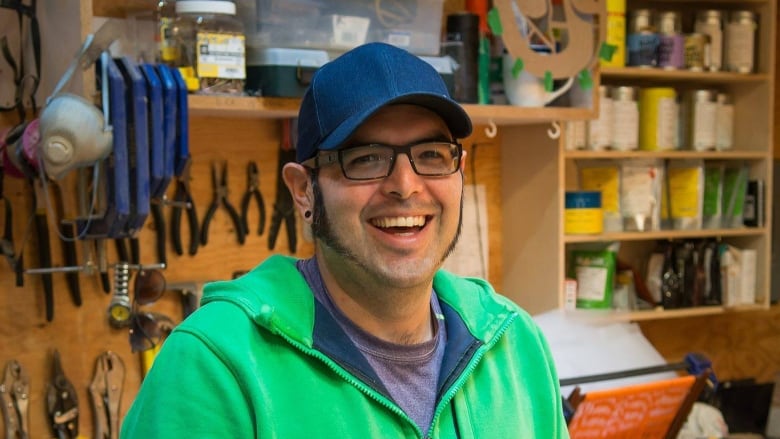 When Ben Davidson graduated high school he was too shy to ask his father, renowned Haida carver Robert Davidson, if he could apprentice for him, so he asked his sister to ask their dad on his behalf.

"I was so tickled beyond words because it was something I wanted so badly to carry on," said Robert Davidson.

And before his unexpected death from a heart attack on Aug. 15, that is exactly what Ben Davidson did.

His impressive body of work has been exhibited in galleries and private collections around the world. It includes coveted carved cedar masks and panels, delicate jewlery, metal, paint and paper creations and monumental totem poles.

Now his portfolio stands as a testament to a highly-respected artist remembered for his contributions to both his culture and his community.

A member of the Raven clan, Ben Davidson died in Haida Gwaii at the age of 44. He is survived by his father, his mother Susan Davidson, his sister Sara Davidson, his wife Tawni Jones, and five children.

In the immediate aftermath of his death, family members requested privacy.

"It just blew our minds because he was so careful with his health and well-being," Robert Davidson told CBC Wednesday.

"It's the biggest challenge in my life and we are all working together to support each other and reassure each other that we will see the sunshine again," he added.

Ben Davidson was an avid cyclist and, according to his obituary, was honoured this year at a triathlon event in Haida Gwaii for his active involvement in the local recreation community.

Also known by his Haida name Tlanang nang kingaas (the one who is known far away), he was a mentor to Haida youth and a member of the Rainbow Creek Dancers, a traditional Haida dance group that performs throughout the world.

His father remembers a man who was deeply committed to being a great dad, as well as to learning and sharing the history of the Haida people and their art.

"I thought of him as being the next generation to carry the torch," said Robert Davidson.

Tips for avoiding back pain and injury while working from...

Sophie the Giraffe turns 60: Behind the allure of the iconic...

Which parts of Canada can expect a white Christmas?

Mom of daughter with Down syndrome encourages parents to...

TORONTO -- A Michigan mother is encouraging parents to think about representation...

Answering the most common questions about Pfizer's COVID-19...

TORONTO -- Health Canada’s approval of Pfizer-BioNTech’s COVID-19 vaccine is another...

BERLIN -- A German man has been charged with 91 counts of attempted murder for driving...

'It looks like we've flattened the curve': Kenney defends...

TORONTO -- Closing arguments are expected to begin today in the trial for the man...