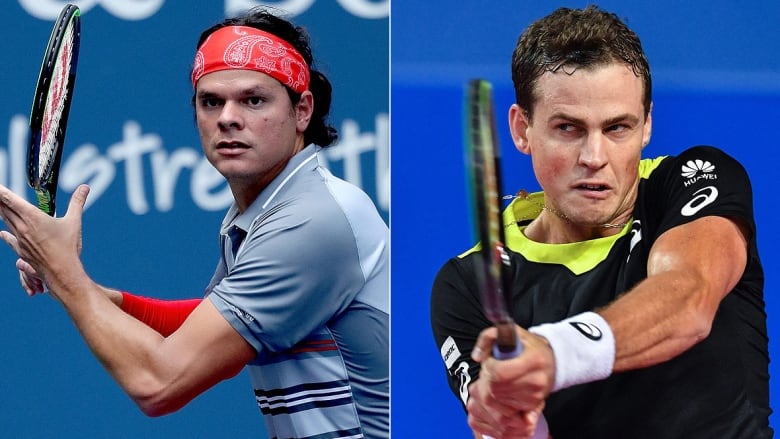 Milos Raonic and Vasek Pospisil have met just a handful of times on the ATP Tour, but their rivalry runs deep.

The two Canadians will face off Thursday in the second round of the U.S. Open in their first Grand Slam match, and just the fourth on the top-tier men's tour.

Raonic, however, says their head-to-head feud goes back around 15 years as the two rose through the nation's tennis ranks.

"I can't remember the first time we played. Maybe as early as under-14," the 29-year-old from Thornhill, Ont., said Tuesday after his first-round victory over Leonardo Mayer. "I don't know if we played under-12.

"I think he won pretty of all them through our junior career, then I won pretty much all of them except the last one through our professional careers."

"Yeah, it's going to be a fun match," he added.
Denis Shapovalov gets Canada off to winning start at U.S. Open
Canadians complete comfortable 1st-round sweep at U.S. Open
The all-Canadian matchup in the second match of the day (approximately 1 p.m. ET) at Louis Armstrong Stadium comes after all five of the country's singles players advanced to the second round of their respective draws. Montreal's Felix Auger-Aliassime and Denis Shapovalov of Richmond Hill, Ont., also won their men's opening matches, while Leylah Annie Fernandez of Laval, Que., won her opening women's match to pick up her first Grand Slam victory.

Shapovalov moves on to third round
Shapovalov, the 12th seed in New York, grinded out a 6-7 (7), 6-4, 6-4, 6-2 victory against Kwon Soonwoo of South Korea on Wednesday to set up a third-round meeting with 19th seed Taylor Fritz of the United States.

Shapovalov had 18 aces but also committed 49 unforced errors in a match that needed three hours and 41 minutes to complete.

WATCH | Shapovalov advances to third round with win over Soon-woo:

After dropping the first set, Denis Shapovalov rallied back to take down Kwon Soon-woo in four sets, 6-7, 6-4, 6-4, 6-2. 1:38
Pospisil actually has four professional wins over Raonic, though most of them came at lower-tier events. The 30-year-old from Vancouver beat Raonic at three ITF Futures tournaments in 2009 and 2010, including the final of the 2010 Canada F3 in Sherbrooke, Que., before Raonic beat Pospisil at a ATP Challenger Tour event in Lexington, Ky., later that year.

At the ATP Tour level, Raonic won the first two meetings, including a semifinal match at the 2013 Rogers Cup in Montreal, before Pospisil was victorious in the second round of the 2018 European Open in Antwerp, Belgium.

"There's a little bit more tension, a little bit more emotion, that kind of thing," Raonic said of facing Pospisil. "I think we're also both pretty well equipped to put that aside and really focus on the tennis."

Raonic, ranked 18th in the world, came into the U.S. Open on a high after advancing to the final of the Western & Southern Open last week at the same venue, where he lost a hard-fought match with top seed Novak Djokovic.

Milos Raonic of Thornhill, Ont., beats Leonardo Mayer in straight sets 6-3, 6-2, 6-3. 1:31
World No. 94 Pospisil, meanwhile, has enjoyed a career resurgence since returning from surgery for a herniated disc last year. He was instrumental in helping Canada reach the 2019 Davis Cup final and reached his second career final earlier in February in Montpellier, France before the ATP season was suspended due to the COVID-19 pandemic.

Pospisil played his first match since late February on Tuesday and said he felt a bit rusty but was ultimately happy with his first-round win over Philipp Kohlschreiber.

"I was pleasantly surprised how I played, because I didn't feel great in practice preparing the last week or so," Pospisil said after Tuesday's win. "It's always tough coming back after not playing a match for six months or whatever, but overall I'm pretty pleased."

Vancouver's Vasek Pospisil defeats Philipp Kohlschreiber in straight sets 7-6 (4), 7-5, 7-6 (3). 2:17
It's the first time four Canadian men are in the second round of a Grand Slam since five players advanced out of the first round of the 1959 US Championships.

Raonic thinks the Canadians in New York are well prepared to make a deep push into this year's U.S. Open.

"I think the opportunity sort of comes from the players that took the appropriate time and the appropriate measures to most maximize the training for the last five months, however long it's been," he said.

"I know Felix was training. I know all the Canadians have been training. Denis, as well. Me and Denis were both in The Bahamas towards the last part of it. I think those are the ones that are going to have, let's say, the greatest privilege or opportunity."
Serena Williams surpasses Chris Evert for most singles victories in U.S. Open history
Osaka's U.S. Open goal is to sport 7 masks honouring 7 victims of racial violence
Auger-Aliassime faces former world No. 1 Andy Murray of Britain on Thursday night at Arthur Ashe Stadium, while Fernandez faces No. 2 seed Sofia Kenin of the United States in the first match of the day at Ashe — the biggest court at the facility. Almost all of the stadium's 23,771 seats will be empty with no fans allowed on site.

Trudeau's virtual tour and Bieber's country music nod: In The News for Sept. 2

Is there a way to save Toronto's only Black-owned radio station G98.7FM?

'What’s up doc': Voice actor from Scarborough, Ont. to...

Man taken into custody after climbing onto wing of airplane...

A man was taken into custody after he climbed onto the wing of an Alaska Airlines...

The Ontario government has extended all COVID-19 emergency orders until Jan. 20.

Some older Canadians opt to take their chances, winter...

Now that they're safely back in Florida, Rose and Perry Cohen are looking forward...