Late-stage COVID-19 vaccine trial on pause due to possible serious side effect. Here's what that means

A volunteer participates in the vaccine trial in Oxford, England, on July 7. Scientists at the University of Oxford have temporarily halted Phase 3 clinical trials of the COVID-19 vaccine after a reported 'unexplained illness,' which is being investigated. (University of Oxford via The Associated Press) 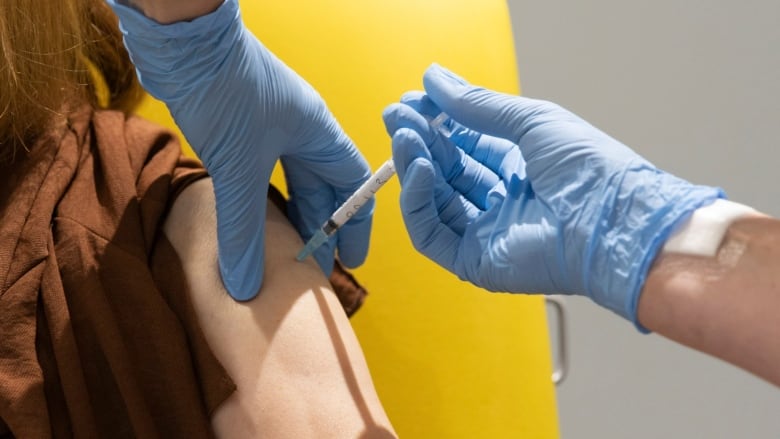 A front-running team in the race to develop a COVID-19 vaccine has put its late-stage trial on hold after a reported "unexplained illness" in one of the trial volunteers. Here's what that means for the quick development of a COVID-19 vaccine.

What kind of vaccine trial got put on hold?
The trial was a Phase 3 clinical trial for a vaccine being developed by the University of Oxford and pharmaceutical company AstraZeneca.

It's the largest type of clinical trial, requiring thousands of volunteers, and is the last of three stages of human testing before a vaccine can be approved for use. Its main goals are to:

Get a better idea of possible side effects and how often they happen, including rare side effects that might not show up in smaller trials.

The vaccine being tested is a non-replicating viral vector vaccine.

The federal government reported on Aug. 31 that it was close to a deal to secure doses of this particular vaccine for Canadians.

Why was the trial suspended?
AstraZeneca reported Tuesday evening that there was a "potentially unexplained illness" in one of its trials in the U.K.

That triggered a "standard review process," intended to ensure safety when that happens.

While the trial is suspended, the incident will be investigated by independent reviewers not involved in the trial itself.

What kind of illness was it?
AstraZeneca said Wednesday that the patient had neurological symptoms associated with a spinal inflammatory disorder called transverse myelitis, but a final diagnosis was still pending as more tests are carried out, Reuters reported.

That involves localized inflammation of the spinal cord, which can cause symptoms such as weakness, loss of sensation or even paralysis of the arms and legs. It can be caused by autoimmune diseases, viral, bacterial or fungal infections or parasites, but it has also been reported as potentially a rare side effect of vaccinations for diseases such as influenza or rubella.

However, researchers who have studied it note that it's difficult to confirm or exclude the link between the disease and vaccination, since it can occur coincidentally due to other causes after vaccination.

What is the goal of the review?
It will try to determine whether the illness was related to the vaccine.

Because trials like this are typically double-blinded, the researchers don't know whether a given volunteer received the vaccine or a placebo. That's one of the reasons why the review needs to be conducted by an independent committee that is not doing other analyses in the study.

Even if the volunteer received the vaccine, the timing of the illness could still be coincidental and unrelated to the vaccine.

Dr. Sumon Chakrabarti, an infectious disease specialist at Trillium Health Partners in Toronto, told CBC News Network that if the patient does have transverse myelitis, he or she will likely be tested for different types of infections to see if a cause can be determined.

"I've seen many of these cases myself, and we often come up with viral causes," he said.

If that happens, the review may be able to rule out the vaccine as the cause and allow the trial to resume.

How often do pauses like this happen?
On the one hand, they're not triggered by "mild" side effects, and there haven't been any publicized for any COVID-19 vaccine trials so far, despite the large number underway. However, AstraZeneca disclosed Wednesday that it had briefly paused a COVID-19 vaccine trial in July after a study volunteer was found to have multiple sclerosis. An independent review panel concluded the illness was not related to the vaccine.

Dr. Samir Gupta, associate professor of medicine at the University of Toronto, said that "it's not a routine thing to stop a massive trial mid-course like this."

But on the other hand, it's not unexpected, given the size of the trial, said Dr. Michael Gardam, an infectious disease specialist at Women's College Hospital in Toronto.

"I would argue for probably every vaccine that's ever come to market, there's been an event like this," Gardam said.

"When you're giving vaccine to tens of thousands of people, something's going to happen to one of them. And chances are it's happenstance ... it's not linked to the vaccine. But each time, you have to investigate it."

Will the pause slow down development of a vaccine?
"Not necessarily, it depends on what they find when they do the investigation," British Health Secretary Matt Hancock said on Wednesday.

Gardam said he doesn't think it will cause a significant delay.

Investigators will try to figure out "a reasonable explanation" for the cause of the illness, Gardam said, which may take some time.

A pause occurred during the Phase 1 trial of a Canadian-made Ebola vaccine in 2014 after several volunteers reported joint pain. An investigation found that the side effect was likely caused by the vaccine, and the study resumed three weeks later with a lower dose.

In this case, Gardam said he thinks it will be hard to draw any conclusion based on one illness and that the University of Oxford researchers will be able to "quite quickly get back up and running again."

However, they will need to collect more data to see if others show similar illnesses. If that happens, he said, "then that's a completely different story."

WATCH | When will a COVID-19 vaccine be ready?:

How worried should we be about this pause?
If it turns out that this is a potential adverse effect of this vaccine, "that would obviously be a substantial showstopper for this vaccine," said Dr. Andrew Morris, an infectious disease specialist at Sinai Health, the University Health Network and the University of Toronto.

He's concerned there wouldn't be access to the vaccine, which is in advanced stages of development. It's also one that many countries are pinning their hopes on, with substantial investment and three billion doses reserved by governments around the world and by the COVAX Facility, which aims to provide access to more than 70 per cent of the world's population.

"Any step back is really a setback for all of us," he said.

But at the same time, researchers such as Gardam say in some ways, the pause should ease people's concerns, as it shows that the system is working and highlights the importance of Phase 3 clinical trials to ensure the safety of vaccines.

"This in and of itself isn't a big deal," he said. "This is what is supposed to happen.... This gives me some comfort.

"The fact that this has been stopped appropriately, it'll be investigated. We'll learn about it and then presumably the trial will start up again. That's exactly what's supposed to happen."

What you need to know about COVID-19 in Ottawa on Wednesday,...

A homeless person lies in a tent pitched in a centre reservation in downtown in...

No winning ticket was sold for the $27 million jackpot in Friday night's Lotto Max...

FAQ: Answering the most common questions about Pfizer's...

A nurse holds a phial of the Pfizer-BioNTech COVID-19 vaccine at Guy's Hospital...

Estonians erect statue and give home to beloved stray dog

TALLINN, ESTONIA -- Zorik was never the tail-wagging or hand-licking type. But that...