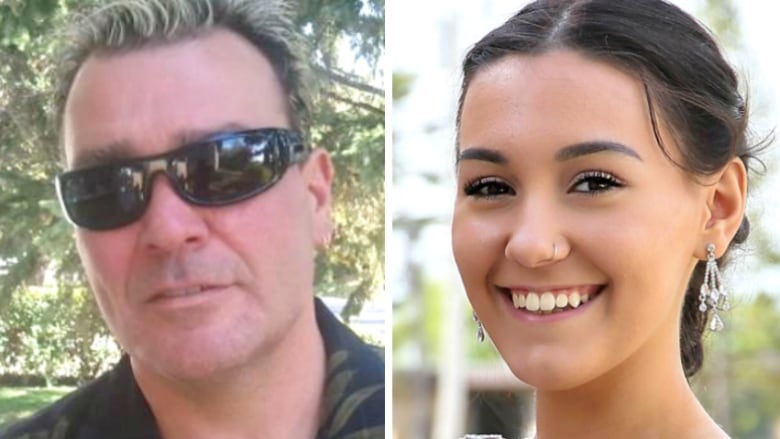 A father who killed his teenage daughter and caused lifelong injuries to her best friend after rolling his Jeep while driving drunk has been handed a 5½-year sentence.

Court of Queen's Bench Justice Kristine Eidsvik handed down the prison sentence and an eight-year driving prohibition for Michael Shaun Bomford on Wednesday for the 2016 death of his daughter Meghan Bomford.

"No sentence I impose today is going to bring Meghan back or miraculously heal Kelsey Nelson," said Eidsvik.

The judge commented on Nelson's "incredible courage," noting the young victim's life has been "altered and damaged in the prime of her teenage years."

Nelson, who was 16 years old at the time of the crash, struggles with memory and speech. She said she still talks to her best friend of 12 years, whom she calls her "soulmate."

"I just really hope that she can feel my love still because I feel hers," Nelson said through tears, outside the courthouse.

On Oct. 18, 2016, Bomford picked up Meghan and her friend so the girls could get to the police station to get criminal background checks they needed to become junior ringette coaches.

Bomford was driving west between 68th Street and 52nd Street N.E. on McKnight Boulevard N.E. when he lost control, fishtailing and then rolling, throwing himself, his daughter and her friend from the SUV.

Meghan, 17, died after she was thrown from his Jeep.

At the time of the crash, his blood-alcohol level was three times the legal limit and he was driving more than 30 km/h over the speed limit.

Nelson suffered a brain injury after she was thrown from the vehicle. She attended much of the trial but did not testify as she has no memory of the crash.

Since the crash, Nelson, now 20, has undergone three brain surgeries. She broke her neck, back and facial bones, ruptured her eardrums, punctured a lung and spent 63 days in hospital. Now she has a permanent brain injury, impacting her cognitive skills, problem-solving, memory and language. She's missing an inch of her skull.

Bomford was also badly injured. He spent three months in a coma and had to relearn how to walk.

Although he caused "incredible suffering," Bomford has shown he is "terribly remorseful," Eidsvik remarked.

The 55-year-old cried through parts of the sentencing hearing as the circumstances of his daughter's death were revisited.

At trial, defence lawyer James Wyman had argued there wasn't enough evidence to prove it was his client behind the wheel, while the prosecutors presented text messages between Meghan and her mother during the drive that suggested Bomford was driving.

Nelson is angry Bomford chose to go through a trial rather than plead guilty. She says his remorse means nothing to her.

"He had so many chances to own up to his actions, to take responsibility. So no, his sorry to me is really nothing."

Heather Cooper, Meghan's aunt,  has been the family spokesperson because Meghan's mother and sister Sarah have not wanted to attend court.

Cooper says now that the court process has reached a conclusion, the family can finally grieve Meghan.

"She was a light in our family and it's been extinguished.… We've had turmoil, with somebody who committed the crime and wouldn't even take responsibility for it, hanging over our heads for four years," said Cooper.

'Dangerous territory': How Ottawa-Gatineau became a COVID-19 hot spot, and what...

'A difficult day': Nightclub and banquet hall operators in B.C. react to forced...

Eastern Ontario's Catholic school board says French-speaking teachers have all been...